Funny Jokes To Make You Laugh

Laughter is known as a great medicine and a joke a day, they say, helps keeps the doctor away. So here are some of the funniest jokes to make you laugh out.
….

Two hunters are out in the woods when one of them collapses. He doesn’t seem to be breathing and his eyes are glazed. The other guy whips out his phone and calls the emergency services. He gasps, “My friend is dead! What can I do?”. The operator says “Calm down. I can help. First, let’s make sure he’s dead.” There is a silence, then a shot is heard. Back on the phone, the guy says “OK, now what?
……..

Sean’s been to the pub drinking stout all evening. He’s very drunk and it’s late.  The barkeep announces “Last Call!”  Sean protests and the barkeep tells him, “Sean, it’s time ya drink up a get yeself home.” Sean hoist his drink and drains it and commences to get up from the bar stool.  Thud! He lands arms and legs akimbo on the floor.  He struggles to rise but unable to do so he resigns himself to crawling out and literally drags his drunk ass out the door.

He reaches the street corner and attempts to pull himself up on the pole. Thud!  Again he lands arms and legs akimbo on the sidewalk.  He struggles to rise but unable to do so he resigns himself to crawling across the street. This continues for several blocks Seans attempting to rise and falling to the street with a loud Thud.  Fortunately he lives reasonably close to the pub and 45 minutes later he’s dragging his ass up the walk to his front door.

Exhausted now and still drunk he finally reaches the door to his home. He struggles to pull himself up to get the key in the lock.  Thud! He lands arms and legs akimbo on the ground.  He struggles to rise but unable to do so he somehow manages to get his door unlocked.  Fearing the worst if his wife awakens and finds him in this condition he crawls as quietly as he can manage to the couch, covers himself with an old wool blanket and immediately passes out.

He’s rudely awakened at 9 am by his wife leaning into his face screaming Sean, ya drunkin’ sot, ye were fluther’d an piss’d agin les night!  He rubs his red eyes and says, “How do ye know wot I was doin’ gowl? To which she replies, McDuff at th’ pub called this marnin’.  He said ya left yer fockin’ wheelchair there again ya manky gimp!
…..

Sherlock Holmes and Dr Watson were going camping. They pitched their tent under the stars and went to sleep. Sometime in the middle of the night Holmes woke Watson up and said: “Watson, look up at the stars, and tell me what you see.”

Watson replied: “I see millions and millions of stars.”

Holmes said: “and what do you deduce from that?”

And Holmes said: “Watson, you idiot, it means that somebody stole our tent.”
….

A taxi passenger tapped the driver on the shoulder to ask him a  question.

The driver screamed, lost control of the car, nearly hit a  bus, went up on the footpath, and stopped inches from a shop window.

For  a second, everything was quiet in the cab, then the driver said, “Look  mate, don’t ever do that again. You scared the living daylights out of  me!”

The passenger apologized and said, “I didn’t realize that a little tap  would scare you so much.”

The driver replied, “Sorry, it’s not really your fault. Today is my  first day as a cab driver — I’ve been driving a funeral van for the  last 25 years.”
…

A man is flying in a hot air balloon and realizes he is lost. He reduces height and spots a man down below. He lowers the balloon further and shouts: “Excuse me, can you tell me where I am?”
The man below says: “Yes, you’re in a hot air balloon, hovering 30 feet above this field.”
“You must be an engineer” says the balloonist.
“I am” replies the man. “How did you know.”
“Well,” says the balloonist, “everything you have told me is technically correct, but it’s no use to anyone.”
The man below says “you must be in management.”
“I am” replies the balloonist, “but how did you know?”
“Well,” says the man, “you don’t know where you are, or where you’re going, but you expect me to be able to help. You’re in the same position you were before we met, but now it’s my fault.”
…. 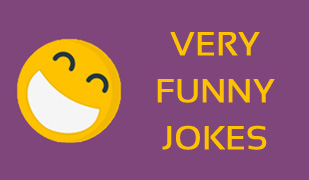