BBTitans: Something Is Brewing Between Khosi And Yemi 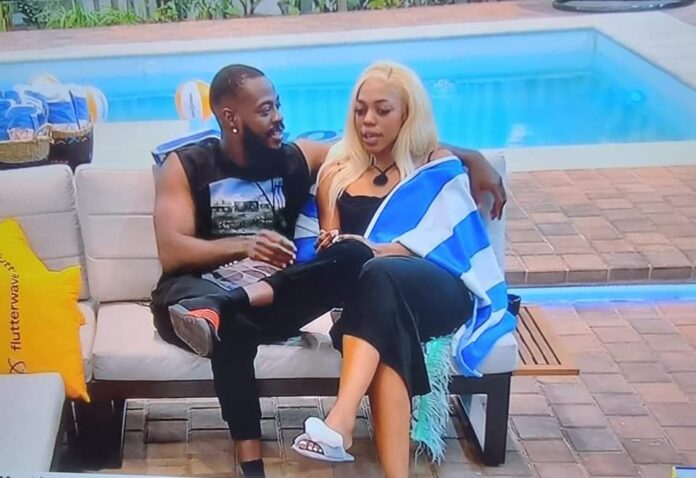 She is using Yemi to play.


She told Yemi, that all her friends said if she won HOH or if Yemi won, it will be a no brainer who she/he would pick to share the HOH lounge with.

She said both of her friends said that she will pick Yemi.

She said that because she and Yemi have a romantic spark, it would not be wise to share a bed for a week.

Me: Romantic spark in this 24hrs? Oh Chim.

Yemi says to her that if he won, he would have had difficulties picking her because of their conversation yesterday.

He asked Khosi how she would feel if he won HOH and he picked someone else to share a bed with.

Khosi said if Yemi wants to go and be with anyone else, he can go and then come back, but that will be if she is still available.

Flash back to yesterday, in a conversation with Yemi, Khosi told him that she is in a 3yr relationship with a guy who treats her amazing. So there’s no room for Khosi.

She also told all the housemates in their getting to know each other session, that she is in a relationship.

So Yemi says to her that he wouldn’t pick her in such a situation, so that housemates don’t start to look at her funny.

So she would rather that if he wins HOH, he picks her as Deputy HOH, so that she declines his offer and then, he can pick someone else and that other person will know that she was a 2nd choice..

Yemi says he would have picked Tsatsi because they do not have a connection. So they can share a bed together.

Khosi says if he picked Tsatsi, he would not have any kind of connection with her afterwards.

Then Khosi says, maybe they should spend time with other people. Spend some time apart

So Yemi says, so you are suggesting that I spend time with other people?

Khosi says: He could have said anything else but that. That she can see what he is trying to do. That why can’t he be by himself, why should spending time apart, immediately mean that he should spend time with other people.

Yemi is confused. He says, but you just said…

Khosi says, maybe she failed to communicate her thoughts right and that’s why Yemi got defensive.

Somebody should tell Khosi, that this attitude is giving Witchcraft.

BBTitans: “She should forget about that Relationship”-Nana and others blast Khosi for claiming she has a boyfriend outside (Video)

BBTitans: Sandra fumes in anger after seeing Mmeli and Nelisa kissing under the duvet (Video)

Nigerian Skitmaker, Zicsaloma Gifts His Friend One Of His Old Car(Video)