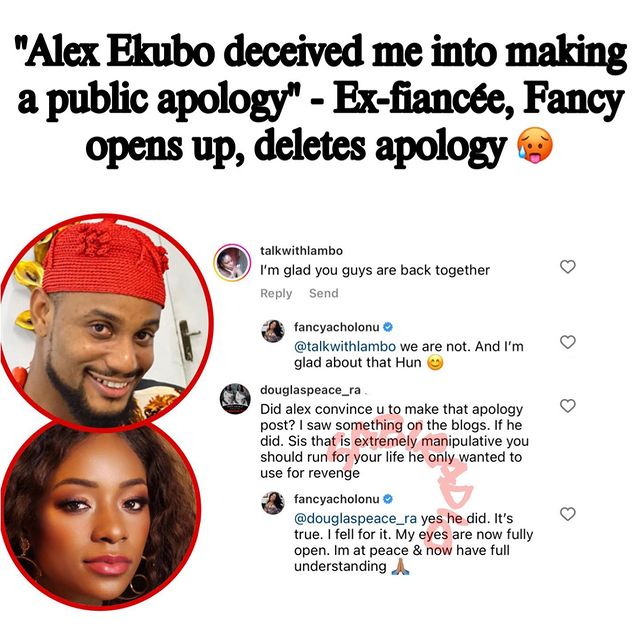 Alex Ekubo’s ex-fiancée, Fancy Acholonu has just revealed that Alex Ekubo deceived her into writing the public apology letter she wrote to him, asking for forgiveness and saying she wants him back.

This somewhat confirms the information in a leaked chat from days ago which showed that Alex Ekubo was aware of the apology message that Fancy eventually posted to her Instagram page.

Fancy has since deleted the so-called apology from her page and left Lagos where she visited in December.

Fancy tendered an apology to Alex Ekubo via her Instagram page months after announcing on social media that their engagement has been cancelled.

I still blame you Fancy. You should not have made the break up public. If you broke up with Alex by letting him know, both of you can still get back now without all these people asking you questions.

You don’t even know these people.

Alex is a mean guy. I think he is over doing this. You can ask the girl to clear the air without making her look like a f…o…o…l.

I dont support this abeg.

“If your man doesn’t fall asleep after sex, You have failed as a woman”-Actor, Benson Okonkwo opines

“I’m definitely having a baby this year”-BBNaija’s Mercy Eke reveals as she set to...