At a press conference, Mr Trump and Mr Moon reiterated their call for the North to denuclearise, with Mr Trump saying it “makes sense for North Korea to come to the table”, and to “do the right thing, not only for North Korea but for humanity all over the world”.
Though the US had deployed a significant military presence in the region, he said he “hoped to God” he would not have to use it against North Korea.
The two leaders also called on China and Russia to put pressure on Pyongyang, and said they were lifting the limit on South Korean missile payloads, which they had agreed to do in September. 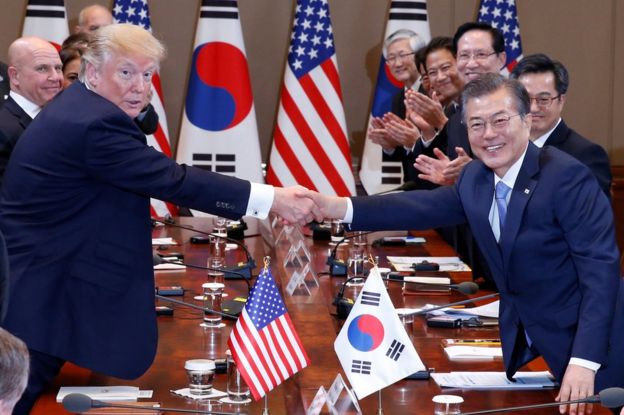 Japan’s leader Shinzo Abe said earlier that he was considering it.

Though the US president will only spend about 24 hours in South Korea, it is perhaps the most symbolic stop in his Asian tour, says the BBC’s Robin Brant in Seoul.
The trip is designed to bolster the military alliance that has long protected South Korea, and strength in unity is the message they want to send to North Korean leader Kim Jong-un just across the border, says our correspondent.