Police are awaiting the post-mortem results to determine the cause of death of a the Nigerian man, Ibrahim O, during a drug raid on a suspected drug den in Vanderbijlpark, south of Johannesburg.

According to SA media, cops got a tip off about a house where drugs were being sold in Vanderbijlpark, in the Vaal and decided to raid the house. 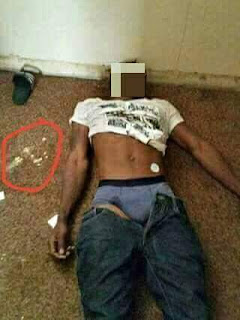 “The officers were confronted by a group of men when they arrived on the premises. Police fired shots but six officers were injured after being attacked by the men. When the cops decided to withdraw from the house, the group emerged from the house with a dead person and placed the body on the bonnet of the police vehicle.” said one report.

Another report said that “they were seen entering the house and later when they came out, a dead man was found inside, believed to have been suffocated with a plastic bag over his head”

According to another resident who claims he was an eyewitness, the cops were with the Nigerian man in the house. The man allegedly refused to admit that he sold drugs, so cops threatened him.

The witness said the four cops covered his head with plastic and he suffocated to death.

Cops, however, tell a different story. They claim the man was already dead when they went into the house.

A man living in the yard said he heard dogs barking and woke up.

“When I got outside I found many cops in the yard. I was put against the wall and searched. When the cops heard me speaking Sotho they let me to go.”

He said when he went into the house he found his neighbour being beaten by the cops.

“They had plastic over his head. I asked them to stop. They told me to leave and said the man would tell the truth.” The witness said he stood outside for a minute and when the cops left the house, he went back inside. “I found him dead,” he claimed.

The dead man’s family say they have no doubt the cops killed him by suffocating him during their interrogation.

After the dead man’s family was called, they erupted in an anguished rage and took the body out to the yard. There they placed it on the bonnet of the cop van.

“You killed him, now eat him or bury him,” relatives of the dead man screamed at cops.

From Genesis To Revelations