Yesterday gunmen stormed into a Catholic church in Ozubulu and gunned down members of the congregation who were attending Sunday mass. As the drama unfolded and social media was agog with gory pictures, the rumour mills started grinding and the blame was immediately directed at all sorts of terrorist groups. As the day progressed, however, the truth filtered through and it was revealed that the source of this massacre was an enemy within otherwise known as Greed.

It is said that innocent people lost their lives in the incident but let us ask ourselves, is anyone really innocent in this? Can any of us claim to be innocent? Are we really surprised that this incident occurred? Have we not been courting this enemy for several years now in Igboland? Is it something that started today?

According to reports corroborated by the governor of Anambra state, the incident was the outcome of a drugs war between two drug barons from Ozubulu who were fighting over a debt arising from a drugs deal. Having gone to the house of one of the barons known as “Bishop” and not finding him home, the gunmen proceeded to the church to seek him out and kill him. They marched into the church, saw his father and opened fire killing everyone who was in the way. What gave them the impetus to march into the church premises with their guns and open fire on ‘holy grounds’, committing an act that is a total abomination? They clearly did not recognize the holiness of the premises after all they were aware that the church was built from the proceeds of crime and drug sales. As far as they were concerned, they were home!

And that is where the problem lies. That is where we should begin to question our own innocence in this matter. Is there anyone in that town who was unaware of “Bishop’s” reputation or the source of his wealth? Didn’t the priests accept his blood money to build their church? Didn’t the villagers attend the church knowing where the funds came from? Didn’t they treat the donor and his father with deference because of his ill-gotten wealth? What other outcome could we then expect? How then can we claim to have been innocent?

I attended the funeral of my friend’s father in the East some years ago. At the end of the service, the priest began to name the ‘wealthy’ people in our midst and call them by name to come forward and make donations to the church. He thanked them all for being there and shamelessly badgered them for funds to renovate his church. Neither he nor the son of the deceased who assisted him in identifying the targeted donors saw it fit to thank the rest of us for travelling all the way from Abuja and assisting them in making the event a huge success. We were not important. The focus was on the wealthy people regardless of how this wealth was acquired.

I attended another funeral in Ojoto some years ago. During the proceedings, several men, clearly of questionable character strolled in, accompanied by armed policemen to emphasize their importance. Some were said to be sons of Igwes from neighbouring towns whilst others were clearly successful men of the underworld. One who looked like he was someone’s houseboy dressed up in an ill-fitting safari suit stepped forward with his gun and began shooting in the air. I was horrified and terrified at the same time, and I complained bitterly at the evident lawlessness on display. People around me including my friends, looked at me like I was some spoil sport. Couldn’t I see that this added colour to the event? No one was concerned that the indiscriminate shooting apart from being illegal, could have resulted in a serious accident. They all left at the same time, jumping into their SUV’s and shooting in the air. I was told that the purpose of this was to ward off potential armed robbers since they had ‘sprayed’ huge sums of money at the event. The children present looked on in admiration and awe. These were their heroes and role models approved by us, the adults.  So why are we shocked by Ozubulu’s tragedy?

For years, young men with little education and no visible means of income, have come home and built palatial houses for their parents. How many parents refused to live in those houses? What message does that send to the youth? The same people come to the villages and install boreholes and build roads. Soon enough the villagers ‘beg’ them to run for office and before you know it, they are installed in the State or National Assembly or even run for the governor’s office. No questions asked about the source of their wealth. Why then should we be shocked?

Bishop, the drug baron who the gunmen were after celebrated his 36th birthday commissioning roads that he tarred in his community. Governor Willie Obiano’s picture was used to advertise the event, thereby validating this young man. It appears from reports that the governor and the commissioner of police even attended the event. Did they ask him where the funds came from? Hadn’t they heard the rumours? Did they investigate? Are they really shocked at the outcome?

Instead of exhibiting all this shock and sorrow, we should resolve today to end this cycle of greed and worshipping criminals. It’s been going on for so long and we are all guilty. The lesson learnt from Ozubulu is that we are all potential victims so we can no longer pretend that it does not concern us.  Anyone of us could have been sitting in that church on Sunday. It was not an incident that just occurred, it was a disaster waiting to happen and it can happen again if we do not take steps to prevent it!
May the souls of all those lost in the incident at Ozubulu and all the faithful departed rest in perfect peace. Amen. 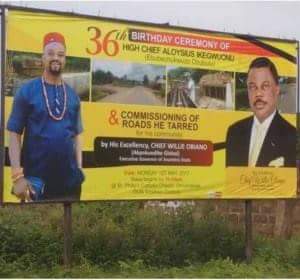