Akwa-ibom Church Building Collapse Might Have Been Caused By Negligence

This ugly incident was 100percent avoidable. This is why I kinda put a clause a very sickening clause on the order of Christianity today. The owner of this church knew quite well that the tensile strength of the metals used as the skeleton of this church will not and CANNOT withstand the crowd that was coming for this ceremony. This is a fact, they tried to do some shoddy renovations last last and then left the lives of these innocent people to FATE.

I do not doubt the fact that some church owners are ritualists but this is a case of human errors. The building was rushed. Those roof and other metals were installed about three days to the ordination. That morning work was still ongoing. The pressure ofrom the large audience and the sound system that was blaring that morning shook the entire place to the ground. There was not enough pillars for the structure.The metal was weak, the church took in a capacity that is 50 times more than what it can carry, during the worship people were singing, dancing and clapping putting further pressure on the metals, the structure had to bend to the side that carried more weight and caved in. The weight I am talking about is not just the people sitting on the floor of the hall, those ones that were packed upstairs, ie all around the center were the chief cause of this disaster.

The metals were originally made to hold the roof, ie the canopy but due to the way we manage everything in this country they decided to make setting arrangements up there in layers without doing any quality assessment.

Look at the number of people that lost their lives, Stella, as at evening yesterday, the death toll was approaching 200, this is almost like a plane crash. This is totally avoidable, more people are dying and are in critical care in the hospital. I know what I am saying, the death toll now would have reached 200. I don’t blame the sick idiots, they won’t count children as number of people that died afterall, they are not human beings. The people responsible will go Scott free. That I am sure. 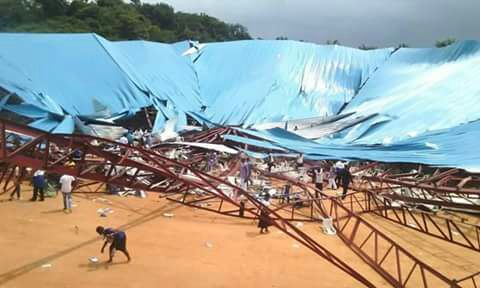 How is it possible for such a mighty structure to stand with no pillars to support the building?. The crane used simply gave way due to lack of support and secondly, there is a huge ravine at the back of the church which makes the soil texture very soft and it cracks often.