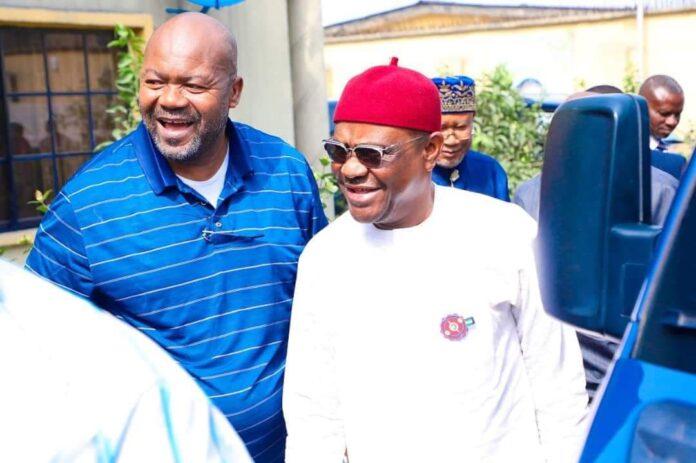 Yesterday, Rivers State Governor Nyesom Wike visited a man named Senator John Mbata to show his gratitude for taking a chance, a bet on him when it was not desirable to do so and to celebrate the Senator’s birthday as well.

Apparently, Senator John Azuta-Mbata took a chance, a bet on Wike, when he was just out of law school and not sure what fate had in store for him.

Senator Mbata saw the potential and restlessness of the young Wike at that time and decided to convert it into a productive use.

He made Wike his personal lawyer, who was in charge of his land and property transactions.

That was a big miracle, the big break for Wike, and the opportunity he needed at that time to earn a legitimate income for himself, take care of his young wife, and pay his bills as a newly married man.

The jobs from the Senator to Wike were regular, which is what every young person at that stage needs and often comes at the right time when apparently Wike is broke and needs urgent money to settle his bills.

At the return of democracy in 1998, Wike joined a party called the PDP and had an ambition to contest for the local government chairmanship of the area where he comes from.

Knowing that he does not have the means or the finances to sponsor his own election, he went back to his benefactor, who sponsored the election, and against all odds, Senator Mbata made sure that his protege won both the party’s primaries and the main election itself.

Ever since that time, Wike has not looked back.

It is safe to say that because Senator Mbata took a bet on Wike, everyone today knows who is called Nyesome Wike.

I’m very sure that if Wike had not met his benefactor at that time in his life, he would have ended up as a local champion, a charge and bail lawyer who loves arguing at the newspaper stand every morning in Port Harcourt with fellow free reader’s association.

To show his large heart and that he is grateful for the bet that Senatir Mbata took on his life, Wike has changed the man’s life by making sure that he does not lack and then facilitating local contact from the Rivers State government for his construction company.

Yesterday was his benefactor’s birthday, where Wike shared this story.

Let’s hear Wike as he explains it better.

“So many people do not know my relationship with you. But those who are very close to me and know about my political career know that my first shot at public office was sponsored by you for me to be council chairman of Obio/Akpor Local Government.

“I started making money as a lawyer preparing all the estate documents for you.” “So, I have made money through you before I became council chairman through the preparation of land documents.”

“Your role and the role you played in this community—in fact, the development of this community—cannot be taken away from you,” the Rivers state governor concluded.

Every young person without a popular surname who is trying to make a name for himself or herself can relate to Wike’s story with his benefactor.

The Pentecostal of this world calls John Mbata “destiny helper,” and truly, that is what they are.

John Mbatas of this world come into your life to open doors for you that you can’t open for yourself, give you opportunities that will make you grow, and then bring clarity and insight to your dream and aspiration.

Wike has his flaws, many of them; I am not a fan of his politics, but the fact that he keeps in contact with all his benefactors, which includes the Peter Odili family, shows a man who is grounded in things that matter, a man who understands the impotence of gratitude to people who showed you love when they don’t owe you anything, and then shows his other side, which often is not talked about.

And the lesson from Wike’s story is simple: when the John Mbata’s of this world take a bet on you by giving you a ladder, don’t forget to show gratitude when you have finally arrived, but most importantly, pay the debt forward by taking a bet on another person’s life.

Father Dresses Daughter As Self For Halloween