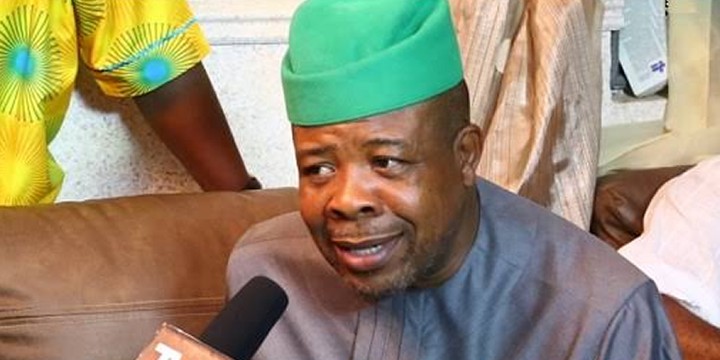 The Governorship ambition of former Imo state governor, Hon Emeka Ihedioha is said to have suffered a setback following the decision of the National Working Committee led by Sen Iyorcha Ayu to stand down the controversial Imo PDP Presidential Campaign Council and Management Committee List.

Stakeholders of the party on Tuesday met with the National Working Committee at the Party’s Secretariat, Wadata Plaza, Abuja on invitation by the NWC resulting from the petitions forwarded to the NWC for non-inclusion of critical party leaders in the formation of the Imo PDP Presidential Campaign Council list.

While addressing members of the National Working Committee, at Wadata Plaza, Amb Kema Chikwe, a former National Woman Leader of the party, in the National Chairman, Sen Iyorcha Ayu that “the problem we have in Imo PDP is the SWC.

“They are compromised. They are a carryover from the former SWC in the state. Their activities are teleguided by Ihedioha. No governorship aspirant in the Imo state can openly declare to run for election under the platform of PDP for the singular reason that the ticket is secured for one man, that’s indeed an insult. “I hereby advise that the NWC do the needful as it concerns the Imo state working committee of PDP to save the party from collapse”

Also, a former state Chairman of the party and ex-National Chairman of NPC, Chief Eze Duruiheoma said the state party chairman, Engr Charles Ugwu’s statement describing Hon Emeka Ihedioha as the face of PDP in Imo state is an insult to the sensibilities of our party leadership.

“The PCC list sent to the NWC do not reflect the decision of the leadership of the party in the state. The Elders Council forum were not consulted, instead the list was prepared between the SWC and one man Ihedioha. Once you don’t support the ambition of Ihedioha, you become their enemies and the next is suspension.

For the party to regain the confidence of the electorate in the state, the State Working Committee’s continued stay in office is a threat to peace in the party”

“My LGA party chairman informed me of his suspension on directives of the SWC, his only offense is that he signed a petition forwarded to the NWC on grounds of financial misappropriation against the SWC.

“As I speak to you Mr Chairman over 17 LGA party Chairmen had received notices of suspension.

“I hereby announce to you Mr Chairman that the current Imo PDP SWC lacks the morality to lead the state to victory ahead of the 2023 general election”.

Also, the National Secretary of the Party, Sen Samuel Anyanwu welcomed the party faithful to the Wadata Plaza for the interactive session with the National Chairman. Also, he called for unity amongst the party members as he expressed displeasure on impunity ravaging the party in Imo.

Anyanwu narrated his ordeal as the most disrespected National Working Committee member in the Country while admonishing the state working committee to stop intimidating party supporters who do not subscribe to their divide-and-rule antics.

Reacting to the submission from invited stakeholders of the party, the National Chairman of the Peoples Democratic Party, PDP, Sen Iyorcha Ayu called upon the state Chairman, Engr Charles Ugwu to confirm the suspension of over seventeen LGA Chairmen of the party, responding, Ugwu denied knowledge of any suspension which led to the National Chairman directing that either there was any suspension or not, the State Working Committee has no right to suspend the LGA Chairmen instead any process for suspension must follow due process and forwarded to the office of the National Working Committee for ratification, he said.