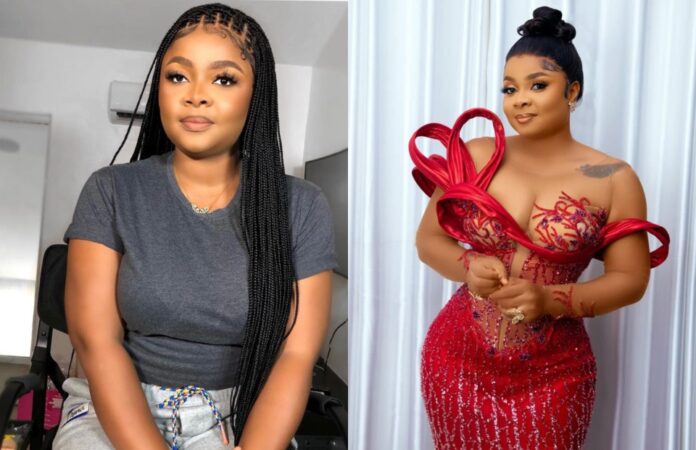 Popular Nollywood Actress, Bimbo Ademoye has revealed that she doesn’t have a relationship with her mother.

She revealed this in an interview with Media personality, Hawa Magaji where she spoke about her childhood, career and relationship.

Opening about her relationship with her mother, Bimbo said that they don’t have a connection because it was her father who singlehandedly raised her.

According to her, her mum abandoned her when she was just two years.

“My mom is alive. She lives like fifteen to twenty minutes away from me. We just don’t have a friendship. So I just don’t talk about it because I would love for people to respect that. Like I’m a very private person. So like my mum left when I was like 2. So my first ever betrayal came from my mother.

We tried to rekindle. I won’t even say rekindle because there was no romance there, I didn’t get to know her. But I tried to build a relationship with her. Right now, we have a relationship. Like I’m doing my duties as a child. Paying for this, paying the rent, allowances, and whatnot. But that’s about what we have.

And I think I’m very okay with that. I’m okay with the no friendship, no closeness zone that we’re in for my mental health and for my own sanity. I’m very much okay with it. But my mum is very much alive. Very beautiful, dark skinned, robust, chubby. I got my hips from my mum and my waist from my mother as well. But yeah, I don’t have a relationship with my mum and I’m fine with that.

Growing up with a single dad wasn’t the easiest because poor guy, there’s some things he doesn’t know. You know, like when you have your first monthly flow, he’s just as shocked as you are. And at some point, he was very torn in the sense that he had to go work for his children and at the same time, he had to be there for his children. Growing up and seeing the sacrifices he would make, like his friends will call and say “let’s go clubbing” and he’ll be like “no, I have children”, it just kinda shaped my relationship with my dad to be stronger.

Tonto Dikeh & Son Get their First Visit From Santa