“How I Spent The Christmas Holidays In The Village” 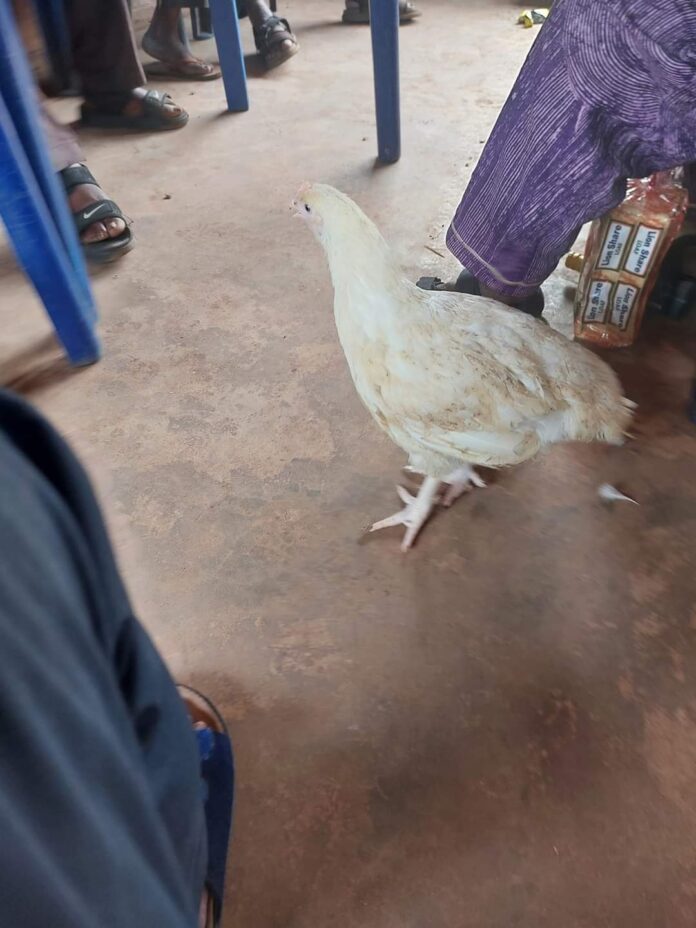 “Every year, all males above 18 years gather at the home of the oldest man in the village.

The former oldest man in the village died about 6 months ago. He died in his 80s but we still met in his obi. After 6 months, we’ll commence meeting in the home of the next oldest man.

The meetings usually start as early as 7 in the morning and stretch on for hours.

A woman that said some despicable things in the village was fined a local fowl and some kolanuts. She couldn’t get a local fowl, but begged us to collect agric fowl. The men argued that traditional fines must be paid using traditional items and demanded that she went back to buy local fowl. The Chairman overruled. Thankfully, she greeted and left. The agric fowl kept roaming around our legs while deliberations continued.

A goat was given to the umunna to share. Whenever the umunna attend the burial of a nwadiala, they’re usually given a goat or cow to share. The cow or goat is shared among all the men who are of levy age, starting from the oldest men who take certain parts of the animals like the balls, head and intestines. People like us don’t stay in the village, so our relations residing there usually take our portions. The secretary of the union goes to the place were the animal is butchered and reads out the names of all males. As he’s reading out, those in the village carry the portions of their relations in the cities. On this very occasion, the goat was killed and shared at night and only few participated. Anger rose among some aggrieved males because of this. Deliberation to settle the anomaly took almost an hour due to arguments and counterarguments.

At some point, my tummy rumbled. I’d attended a party the night before. It seemed that the nkwobi I ate didn’t sit well in my tummy. I had to go to the main house of the late oldest man. Thankfully, they had a modern toilet. They fetched water from the well in a bucket and handed me toilet tissue. While taking a dump I took pictures and reminisced on the days I took dumps in the latrine. A broom sat at corner, a towel hung on a rope, and leftover building materials leaned on the wall.

In the conclave this time around sat 70-, and 60- year old people. There are usually sprinkles of those below the age of 40 and 30. Many young folks don’t return from the cities anymore.

It’s always hilarious attending that meeting, mingling with the elderly, and seeing “native intelligence” at work.

In Igbo land, proverbs are the oil with which we eat yams. Proverbs pass across meanings without lengthy explanations. Proverbs are always present as indicative of native wisdom.

The octogenarians and septuagenerians dish them so copiously while they settle land disputes, comeuppances and family squabbles.

Some of the proverbs can knock you off your seat in laughter.

“We wear trousers because of people outside so that they don’t see our penises. When indoors, we are brothers and we know the sizes of our penises.”

“The anus is good for blowing flutes, but the issue is who will put his mouth to blow it.

“A woman who wants to see the entire length of her vagina without using a mirror will have pain in the neck.”

The meeting usually ends with the sharing of bread and akara. This year’s own was an elevation from the usual. Usually, they share small loaves, but all of us in attended got a big family loaf of a brand called Lion Share Loaf. Lion share indeed. Someone donated akara. There’s something about such foods. The rich and poor attend such meetings, but everyone eats the foods with so much gusto as if there’s a specialness the bread harbours.

It’s usually a time to see villagers you’ll not see anymore till the next 365 days or so.

We always let our father do our payments of levies for the four of us his sons. It’s out of respect, so he brings out notes from his purse as our names and levies are read out and pays.

It was beautiful attending this year’s own. The countdown to the next begins.”