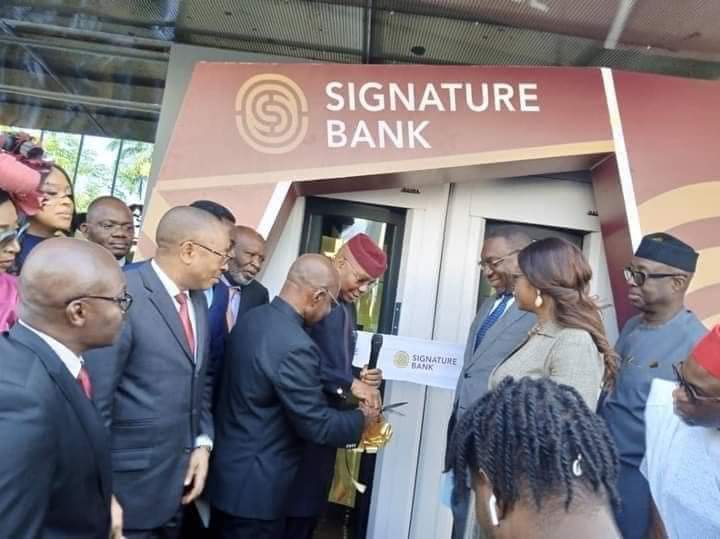 In 2017, the Labour Party’s gubernatorial candidate in Abia State, Alec Ottj, had a dream to own his own bank that would be different from the pack.

He used to be the Managong director of the defunct Diamond Bank, so he has an idea of how a bank is supposed to be run.

He went to work to pitch the idea of owning a bank to his friends and allies.

One of his friends that he pitched the idea to was Mutiu Sunmonu, the former managing director of Shell Nigeria and the former chairman of Julius Berger.

Mutio bought into the idea as Alex Otto doubled down on reaching out to other friends in his circle.

Mutiu is the chairman of the bank today.

Immediately he reached the number of persons in his circle that he wanted to invest in the new bank, Alex Otti and his friends went to work to raise the 25 billion naira capital requirement that needed to be deposited with CBN if CBN was to take them seriously.

Each member of Alex Otto’s circle was tasked with how much they would have to invest if they were to co-own the new bank, which was still a dream at the time.

And the 25 billion naira capital was raised by Alex Otti ahd his friends at the nick of time.

With the successful raising of 25 billion naira, CBN was invited by Alex Otti and his friends to investigate the source of the capital the new investors had pooled together and to vet on their applications.

CBN then went to work to be sure that the source of capital, pulled tighter by Alex and his friends, is made from a legitimate income, from a honest business which is not from drug business, money laundering, or yahoo.

It took CBN 10 months to do a painstaking investigation on the source of capital before a clean bill of health was given to Alex and his friends.

Three months ago, the much-awaited banking license arrived, and what this means is that Alex and his friends are permitted by law to open their bank.

Let’s hear Alex Otti as he explains why he founded a new bank.

Dr. Otti, the founder of the bank, said the new bank was established with the aim of giving attention to the dynamic needs of the customer and meeting and satisfying their desired financial yearnings.

He noted that the journey to establish the bank started in 2017.

According to him, “The journey began in 2017, driven by a yawning gap we identified, a vacuum created by repeated unresolved complaints, poor responsiveness, and unsavoury customer experiences encountered regularly from the banks we did business with.” It came from a yearning for simplicity and ease of doing business and less than adequate attention to the dynamic needs of the customer, not just within Nigeria but across continents.

For example, paying your child’s school fees, trading with partners overseas, settling bills without leaving the comfort of your home, and making payments seamlessly

Interestingly, even as banks’ strategies, products, and service offerings multiplied, changing demographics and dynamics had customers increasingly yearning for more and demanding simpler and more flexible digital solutions. Welcome to the brand-new world of artificial intelligence, robotics, and 3D printing! In fact, welcome to the world of innovation, convergence, and the 4th Industrial Revolution!

“In all these cases, what customers demand is not far-fetched.” What they expect from their bank is not too tall an order. What customers across different business segments are looking for is a bank that fits their aspirations, their personal stories, and their lifestyles. In other words, customers want a bank that puts them first. So, we set out to build a bank that challenges the status quo, is future-forward, embraces change, and impacts the lives of the people we serve.

Building on the learning points and successes of taking the erstwhile Diamond Bank from a loss position in 2011 to becoming one of the eight systemically important banks (SIBs) in Nigeria, a retail trailblazer, and a pioneer in mobile and digital banking, we set about to envision a new way of banking. a bank that leaves no one behind. a bank that is borderless and caters to the unbanked and underbanked. “A bank that will deliver solutions to everyone’s doorstep through digital channels and a focus on service excellence and customer centricity.”

The Signature Bank founder also said he was not going to hold any active positions in the bank but has decided to give opportunities to the younger generation to pilot the affairs of the bank, he concluded.

A story that demonstrates why it is important to have a rich circle of friends, friends you can count on when the chips are down.

The dream, which started in 2017, finally became a reality yesterday as the first branch of the new bank was opened to customers.

The new bank has an ambition to be Nigeria’s No. 1 bank in years to come.

And for the signature bank, today is just day 1.

12 Romantic Things To Do With Your Lover

12 Romantic Things To Do With Your Lover

The NBA Is Hiring A Technical Project Manager (Jobs)