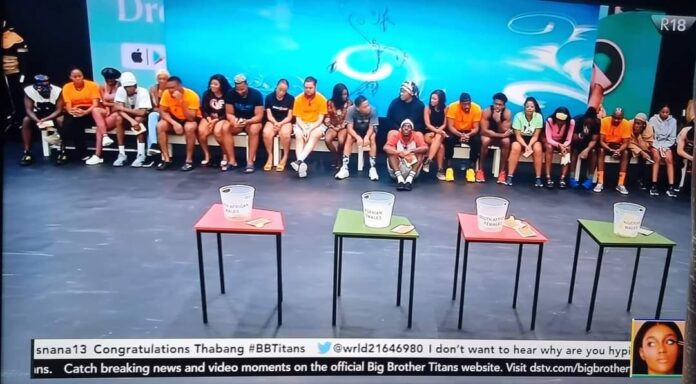 This one choke o.

Right after the eviction show tonight, Big brother introduced a game to the housemates and asked them to take the games seriously.

The girls were asked to wrap a white pole with a blue tape from top to bottom without leaving any space showing the white pole.

The boys played their own game, where they were supposed to stick buttons on a drawing of a chicken, following a colour pattern.

After the games for both genders, big brother announced their positions, from 1st all the way to the last.

Both teams (male and female) were asked to move to the Arena.

Big Brother said to the housemates that this is where their life in the house would become more interesting.

There were bowls set out on tables labelled by Gender and Nationality.

When a housemate is called up to pick, they must pick from a bowl with the opposite Gender & Nationality

E.g A south African Man would pick from the bowl that is labelled Nigerian Woman.

This is how your housemates picked.

7) Kanaga junior picked Tsatsi at first, but she had already picked Ebubu. He had to pick another card, and this time, he picked Blue Aiva. Big brother said to Kanaga…( You seem disappointed) 🤣🤣🤣 that’s because Tsatsi is Kanagha’s girl.

8) Yaya picked Marvin, and the crowd roared in laughter. Coz everyone knows that Yaya has a crush on Marvin. She picked her crush. Big brother said – What a pleasant coincidence.

12) This left Miracle with Khosi.

The import of this game pairing is that going forward, these housemates are to play in pairs.

They are to come up with names for their pairs. No name should be longer than 8 letters. No numbers, No special characters.

Housemates would have their partners for the rest of their stay in the BB house..

They will play to win together and if any one of them is to leave the house, the pair will leave together.

If one partner gets a strike or is disqualified, the other partner would suffer the same fait.

Whatever a partner does impacts the other in equal measures.

I suspect that this strategy adopted by the Big Brother management on BB Titans is to ensure that the house would always have equal measures of Nigerians and South Africans at all times until the game ends.

The game has just begun!